A New Addition to Our Household

Just so there is no confusion. . . there is a great bit of distinction between household and family. While this new addition will be referred to frequently--admired by some and abhorred by others--it is NOT a member of the family. This addition will be in the household but will not join in family activities. This addition will "join" us for dinner but will not view a movie with us afterward. This addition is a he and PE will be naming him. We have tossed around a few names (Ed, Edward, Edgar, Eli, etc.) but ultimately the decision is PE's and he has until Decemberish to decide. At that time a new and improved version of this 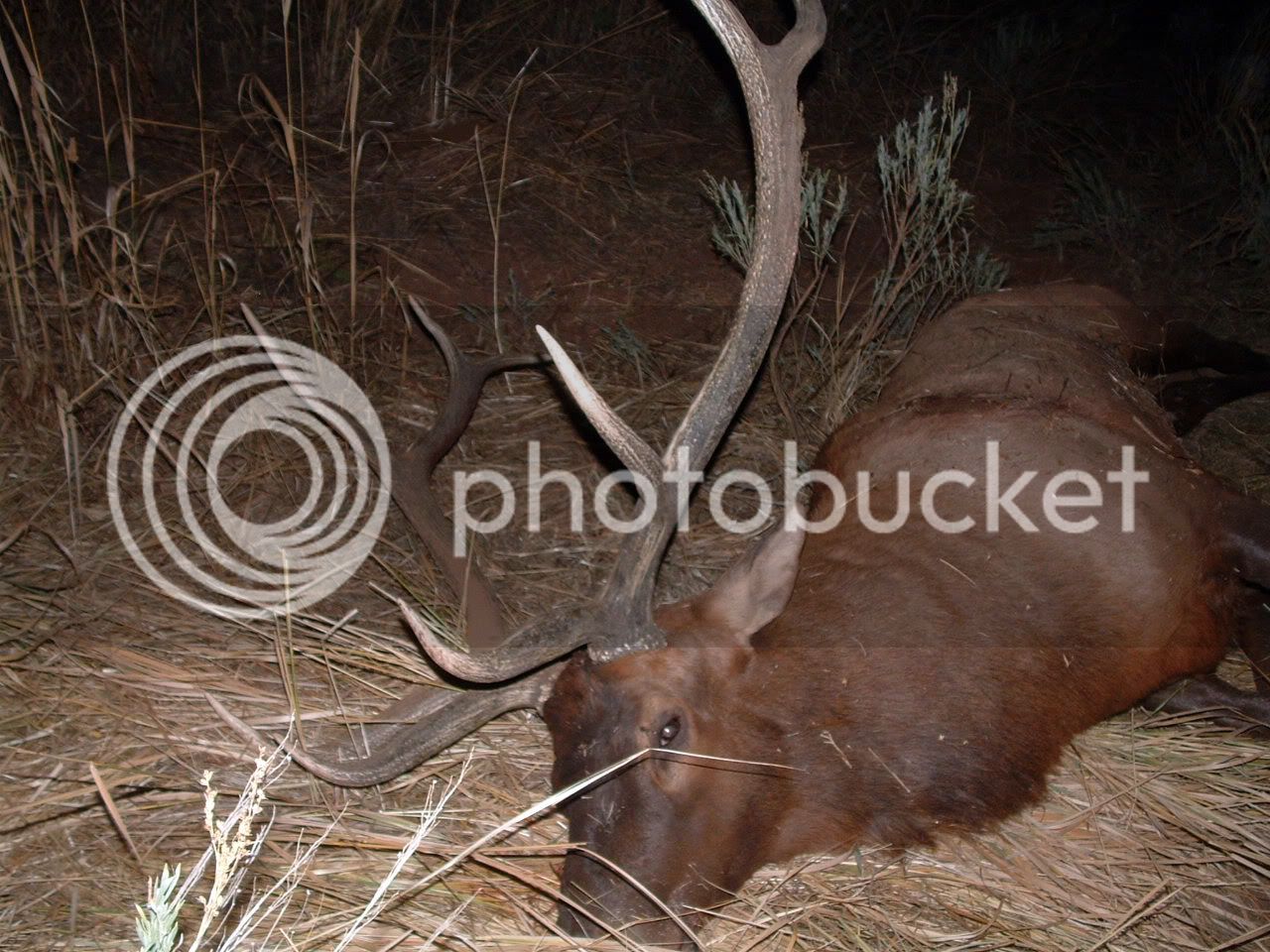 will be joining the household. This picture really doesn't do him justice; but the ones that do make him look impressive make Hunting W. look like he is drunk or a deer in the headlights. Not to mention PE hadn't shaved (or showered) for nine days, was dirty from hunting, and had blood on him so he was looking dead sexy and I don't want anyone getting any ideas. He's mine.

E### will live on the wall above the stairs that borders our dining room. There are deer friends downstairs in PE's "area" that would love to have his company; however, he is too big to a) fit down the stairs and b) hang on a wall down there, so above the stairs he goes. He could also fit in the living room above where the television is but sitting in the living room watching television with E### watching us is not a dream I have. I guess having him watch us cook and eat dinner is somehow better in my mind. Technically he will be looking to the right. So he will stare at visitors as they come in the door. (KLB is SUPER excited for this.) I guess if the "Leave" doormat doesn't discourage someone from visiting, E### staring at them just might.

Hunting W. took full advantage of his nine days of hunting by passing on a couple small bulls and missing a couple others. Hunting W. passed on E### that first Sunday (September 19) since the tag (license for hunting) he had was limited entry (many apply, few are chosen) so he was going for a bigger elk he had seen the Friday (September 17) before the hunt started (September 18). One of the bulls he missed was the morning of the last day of the hunt. I think the fact that he missed the elk not only one time but four (under, over, behind, over) times meant it was not to be. The hunting powers that be must not have wanted him to settle for that measly little bull because later that day, hours before the end of the hunt, everything came together.

After enjoying a delicious lunch with me and the kids and having me tell him, "You will get one tonight!" in place of my usual, "Good luck. Have fun. Be safe." PE set out for the pond he had been watching off and on all week. As he was sitting there reading his book, waiting for the elk to come to the water (because that is what elk do when it cools off in the evening), he looked up and there was E### in all his large five-point glory (completely my wording, not PE's).

Hunting W. took the opportunity and shot. E### got him back for that by finishing his ascent to the top of the hill where he died and rolled/slid into a gully making for a L O N G night for PE who called me at 9:15 or so to tell me he would be late. I finally saw him around 1:30 at which time I had enjoyed less than two hours of sleep and I did not visit my bed again until he climbed in the shower after "taking care" of the elk at 5:30. I enjoyed the visit with my bed for two hours then we had a big day of dropping Bob at school, taking the meat to the butcher for packaging, playing show and tell at PE's work, taking the head and cape to the taxidermist to be mounted, eating a quick lunch, packing lunch for Bob, picking Bob up from school, retrieving PE's camping stuff from up the canyon, returning a borrowed 4-wheeler to Grandpa, and finally returning home at 4:00 or so at which time we took a nap for a couple hours then cooked dinner, did the evening routine (showers, reading, etc.) and went to bed.

The story of E### - Don't be too sad for him. He was an old bull who Sunday (September 19) was with a herd of cows (female elk); getting all the cow tail he wanted when Hunting W. saw him for the first time. By the following Sunday (September 26) he had been bullied out of his sweet life by a stronger (most likely younger) elk as evidenced by the puss pocket on the top of his head and the bruising on one of his flanks. He was on the down hill so really PE helped him out. E### will now "live on" in his large five-point glory on the wall. Woo hoo! Lucky me! **Man I wish there was a sarcasm font.**

Some may be wondering why I don't just tell PE he has to hang the mount somewhere else. Reason one: He looked so cute playing show and tell with his coworkers. Reason two: Why shouldn't he be able to showcase his hobby? (Even though I am going to have to step up my hobby skills and lack of decorating skills to offset that addition to the household.) Sap alert. Reason three: Quite simply, he is an awesome husband and that reason alone makes it worth it. Speaking from having visited the other side of the tracks (you know awesome husband/marriage side versus shitty husband/marriage from hell side), I will take E### the Elk on the wall watching me in the kitchen any day of the week if it means never having to visit (even for one millisecond) the other side again. Welcome E###!

Side note:
There are many opinions out there about hunting and of course the subsequent mounting of a "trophy" animal. Here are several reasons why I think the hunting is okay (as for the mounting, you got me on that one but again refer to reason three above). First, licensed hunting helps keep the ecosystem balanced. If the wildlife population (elk, deer, geese, ducks, etc.) becomes over abundant in an ecosystem it can throw the ecosystem out of balance. When an over abundance of deer/elk/prong horns over graze that leaves less food available for animals (geese/ducks) that rely on plants for survival. Second, the undeniable truth is . . . every living organism gets nourishment from consuming other living organisms. Third (last), by hunting the surplus animals (the animals you can purchase licenses/permits to hunt) a hunter is choosing to get his sustenance from wildlife in place of institutionally slaughtered animals. (So, instead of buying beef/chicken, eating elk/pheasant obtained via hunting.)

**Climbing down from soap box.**